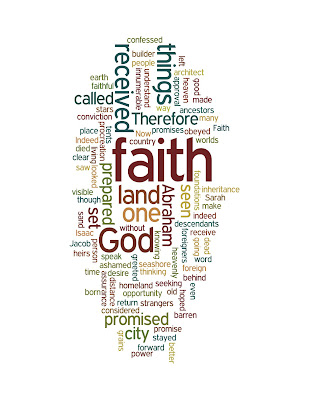 Sunday's Epistle reading is one of my faves and I am looking forward to preaching it. It's Hebrews 11.1-3, 8-16

'...By faith Abraham obeyed when he was called to set out for a place that he was to receive as an inheritance; and he set out, not knowing where he was going. By faith he stayed for a time in the land he had been promised, as in a foreign land, living in tents, as did Isaac and Jacob, who were heirs with him of the same promise. For he looked forward to the city that has foundations, whose architect and builder is God. By faith he received power of procreation, even though he was too old—and Sarah herself was barren—because he considered him faithful who had promised. Therefore from one person, and this one as good as dead, descendants were born, ‘as many as the stars of heaven and as the innumerable grains of sand by the seashore.’

All of these died in faith without having received the promises, but from a distance they saw and greeted them. They confessed that they were strangers and foreigners on the earth, for people who speak in this way make it clear that they are seeking a homeland. If they had been thinking of the land that they had left behind, they would have had opportunity to return. But as it is, they desire a better country, that is, a heavenly one. Therefore God is not ashamed to be called their God; indeed, he has prepared a city for them...'
Posted by Fr. Simon Cutmore at 12:15 am

Faith is the belief that ultimate reality lies not in the here and now, nor in things visible to sight, but in things yet to come and things that cannot be seen. Faith believes that God is, that is exists, is real, even though God cannot be seen and that God rewards those who seek him even when that reward is not forthcoming in the present age...

Faith is the means, the eyes,by which the as yet unseen heavenly country... can be seen from a distance.

The truly real things of life, the transcendant reality for which all can and must be forsaken, lies in things that are for us both future and unseen. Developing a 'faith vision', the ablility to believe from a distance and to accept as hard fact what the Gospel promises, requires constant renewal of the mind. This passage gives examples from Israel's past.

What God asks of us today is no different to what he asked of Abraham and Jesus himself...