Franz Jägerstätter, Ariana Grande and the Coming of the Spirit. 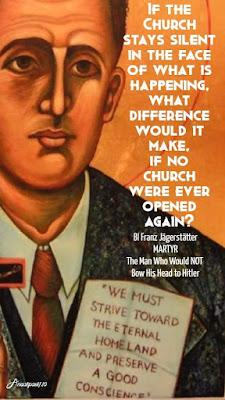 Franz Jägerstätter was an unknown peasant farmer in Austria. He fell in love with Franziska Schwaninger and they married on Maundy Thursday in 1936. Their honeymoon involved a pilgrimage to Rome where they received a Papal blessing.

Inspired by his wife’s faith, Franz began to study scripture and the lives of the saints. When German troops moved into Austria in 1938, he began to openly oppose the Nazi rule and propoganda but he never joined any part of the official resistence. He became a Fransiscan tertiary and during the 1940s was astonished that Catholic layperson and Bishop alike were unprepared to speak out against the regime.

In 1943 he was called up to serve in the the Nazi army but he refused to fight and was tried and executed on 9th August 1943. He is reputed to have said, ‘If the church stays silent in the face of what is happening, what difference would it make if no church were ever opened again?’

There is a place for silence - it is good for our prayer lives and our mental health. Silence, out of fear of what others will think, or in extremis, in fear of our lives, is bad for us and our communities. But speaking up isn’t always easy - whether that’s at school when you know who broke the window or stole the calculator; or calling out our government or other governments when they are inactive in matters of justice which especially affect the poor and marginalised in society. We don’t always feel like we have the power to speak.

The disciples were gathered in Jerusalem for the festival of Shavuot which recalls God giving the Torah on Mount Saini with it’s clear countercultural expectations about distinctive living as God’s people. Also at Shavuot, Jews celebrate a sort of harvest festival 50 days after the passover, where the firstfruits of the harvest are offered back to God. Words from Leviticus are read which remind the community that their agriculture should not only produce enough for the community, but a certain amount should be left for the poor, needy and the foreigner. These actions demonstrate God’s expansive generosity to all people.

St Luke records: And at this sound the crowd gathered and was bewildered, because each one heard them speaking in the native language of each.

Four years ago today, Salman Abedi was at the Manchester Arena towards the end of the show by Ariana Grande. A member of the public reported him to the security team on the gate, as they thought he looked suspicious, dressed in all black with a  large rucksack. Another guard noticed him too but decided not to intervene in case he was branded a racist. Five minutes later, Abedi detonated his device in the foyer of the arena, killing 23 people including himself and injuring over a thousand others.

A few weeks later, Ariana Grande hosted the One Love Manchester benefit concert with a message of unity and peace between all people. The concert and associated fund raising raised an extraordinary £17 million for the victims of the attack. 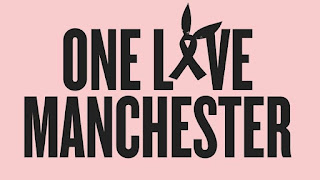 Luke records a crowd gathering. They were inquisitive and excited like a crowd at a gig. What drew them though was not the phenomena that the disciples experienced in the room, but what the crowd heard outside it. All too often we focus on the phenomena of the Holy Spirit at work - oh we don’t do that here. There’s an inference that manifestations like what Luke tries to describe, are irrational and should be avoided. The crowd gathered because of what they heard said in a way they understood.

Luke records the crowd hearing in ways they understood about, ‘...God’s deeds of power.” 12All were amazed and perplexed, saying to one another, “What does this mean?”

London’s Tate Modern gallery staged an exhibition of 20th-century paintings. One wall was just a blank painted surface. Directly opposite was one of Monet’s paintings of water lilies. After staring at the Monet for ages, one gallery-goer described in wonder how she turned around to look at the blank wall behind her. Monet’s vibrant, swirling colours changed what they saw from something flat and formless to a surface with shade and texture.

Sometimes, perhaps more often than not, we need to be open to seeing the blank and ordinary, differently. The experience that was personal to the disciples in that room had transformed their ordinariness into extraordinariness. The encounter with the Spirit made them bold and courageous to tell the vibrant and varied crowd who had gathered, about God’s mighty deeds.

Occasionally sand from the Sahara desert can be found in the UK, having blown here on the wind. Different cultures and nationalities are mentioned by Luke as having gathered in that crowd - each heard about what God was doing in ways they understood. Could we be more open to the surprises blown in by the Spirit today? A friend has spent months in hospital over the years I have known him, tended to and cared for by medical specialists who look out for him and speak up for his cause and act in his best interests. The Advocate of which Jesus speaks in the Gospel, will do the same for us. Luke’s account in Acts of the activity of the Spirit in each disciple will have been a process of trying to recount a very dramatic but very personal experience later on. In Romans, St Paul describes the Spirit’s work as helping ’... us in our weakness; for we do not know how to pray as we ought’ and ‘intercedes for the saints’

What is God asking of us? The gathered crowd, on hearing the disciples communicate clearly with them about God’s activity and love, ask - what does this mean? As if it is possible to comprehend or understand the ways of God. In the Greek text the crowd ask - what will this become?

We have each received the Holy Spirit ourselves - at our Baptism, our Confirmation, at our Ordination, at our Licensing or commissioning for any sort of ministry or service, and at this and every Eucharist as we pray this or similar, ‘‘... Pour out your Holy Spirit as we bring before you these gifts of your creation… as we eat and drink these holy things, form us in the likeness of Christ…’ Filled with the Spirit, we have been given the resources to speak and demonstrate God’s work in us and amongst us - we must speak, as our communities are looking for hope and healing as we edge (please God) out of this pandemic - let’s look for surprising opportunities to speak of or demonstrate God’s love to others; let’s trust the Spirit to be our Advocate, enabling us to be advocate to others and come alongside them - supporting and encouraging them; as the Spirit prays in each of us, let us intentionally turn to prayer afresh for our communities and the church because God knows both need it. As Franz Jägerstätter said, if we don't speak, the church we love, may as well never open fully again. We too are filled. We too must speak.