Walking In His Shoes 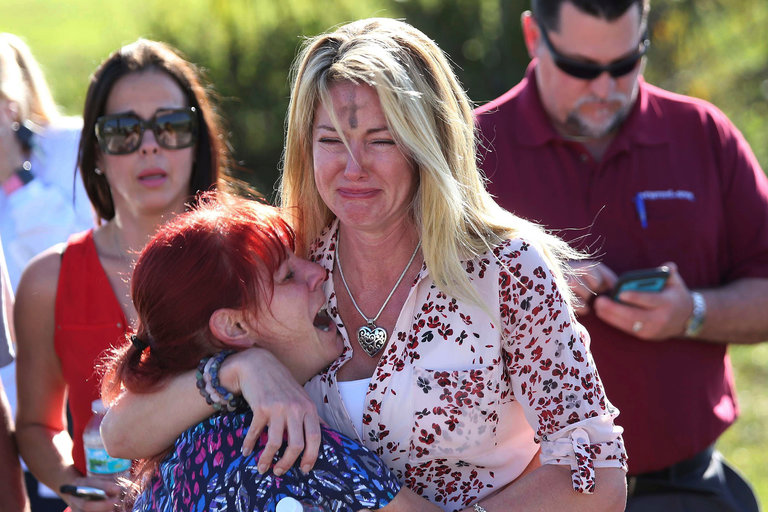 The most striking image I have seen in the days since the shooting at Marjory Stoneman Douglas High School in Parkland, Florida, is that of a bereft mother, her arm around another, both unconsolable at the death of their children. And the reason that the photo will live with me is because on the forehead of one mother as she embraces the other is the symbol of our mortality and the sign of our salvation - an ash cross.

We receive these ashes at the start of Lent as a sign of repentance, of our yearning for God’s forgiveness, of our intent to live our faith more truly in the face of our mortality. “Remember you are dust, and to dust you will return,” says the minister ‘blessing us’ with a blackened thumb. The ashes that mark our foreheads only last for a day, but the mark this makes on our hearts is meant to endure for the entire 40 days of Lent.

And yet this is not the first time we will have been marked in this way - we will have received a similar sign and symbol at our Baptism and again at our Confirmation.  The cross marked on us reminds us that we journey the way of Christ, all too aware that we cannot avoid it and should not shy away from it.

And yet we do shy away from it. We try to down play it’s horror, trying to explain it away as a symbol of the love of God and in so doing, denying the judgement it exercises on Jesus, his ministry and the world. But as we grapple with the cross, we all too often fail to acknowledge that here, at it’s foot, salvation was wrought for us and our relationship with God was forged afresh.

Mark’s Gospel is the shortest of the four we have in the canon of scripture and  it’s author wastes no time in telling us things they think we don’t need to know or that may be considered commentary rather than essentials, so for example, there is no birth narrative in Mark - no manger, no shepherds, no angels or wise men. Scholars reckon it’s because Mark just didn’t think it was relevant to the story that the author wanted to share with his readers and hearers. Scholars also reckon it is the oldest of the Gospels we have with Matthew and Luke sharing  many of the same stories about Jesus. We arrive, almost breathless, at what we hear this morning after a whirlwind of healings, teaching and miracles.

Jesus has been in Caesarea Philippi, the city founded by Philip II, son of Herod, as his seat of power. It was the site of natural springs in a pretty desolate landscape and so was an area historically dedicated to the Greek God Pan, the God of desolate places and fertility. It was a wealthy trading hub - a clash of cultures, traditions and languages. In that religiously and political diverse environment Jesus teaches about who he is and what he has been sent by God to do.

‘… He called the crowd with his disciples, and said to them, “If any want to become my followers, let them deny themselves and take up their cross and follow me. 35For those who want to save their life will lose it, and those who lose their life for my sake, and for the sake of the gospel, will save it…’

John Hesp still lives in Bridlington with his wife. I say still, because he recently won £2million at the World Series of Poker in Las Vegas. But he hasn’t left his job as a caravan salesman or moved house. There are no designer clothes or Rolex watches. He has gifted money to family members and invested some in a business. He still drives the same car and has gone back to playing poker once a month with friends. But I wonder what you would do in his shoes?

Jesus has invited people to be in his shoes since the beginning of the gospel. He invited fishermen to literally come behind him, to walk in the dust of his shoes, to listen, learn and do as He has done. To follow. But here the rubber hits the road - in this multicultural, multiethnic, multifaith place, a seat of power, a place of wealth, Jesus nails his colours to the mast - or perhaps more correctly - looks ahead to what was to come at the cross. This isn’t Jesus predicting his fate - it’s him knowing what He is to do. If Jesus yielded to Peter’s tempting to take another path, Jesus’ status as Son of Man would have been in doubt. He might have gained things, perhaps even the whole world, but he would have lost who he is as the Son of Man, bound to suffer rejection and death. But more than that, the essential identity that Jesus is tempted to forego – taking up his cross – is the identity and temptation that faces anyone who would come behind him, who would follow, who would walk in His shoes.

This morning, Jesus invites us take up our cross. Not His, but our own. We must take responsibility for following Him ourselves. We must carry the sign of what it means to be His disciple everywhere He goes, and there is nowhere in our own daily living that Jesus does not go. We carry that cross into school, into our workplaces, it comes with us as we drink coffee with friends, or sit at the bus stop. We shoulder that cross at the bedside of a sick spouse. We carry it to the graveside of a deceased neighbour - because in all of these places Christ goes before us and we follow. That is what it means for us to be a disciple, to be a Christian - to speak and act as He would in these and countless other places.

But the temptation we face is to leave our cross here. But if we do, we are no longer following Jesus and have given up on the life that He counsels us not to lose.  The Greek word here is the one from which we get our word psyche - our whole selves, our very identity as people. And that life is now so intertwined with the one whom we follow as we bear His mark from Ash Wednesday; from our confirmation; from our baptism. In other words as soon as speak to others as ourselves and not as we have heard Jesus speak - we have put down our cross. As soon as we respond to others in any other way than Jesus would, we have put down our cross. Our cross is hard and heavy - following Jesus is and will be sometimes be really difficult - but in carrying it - we accept the life He offers us and all the world as He heads to Jerusalem, knowing what He must do there.