...seems and appropriate song to be playing today - the 5th anniversary of the 7/7 bombings in London. 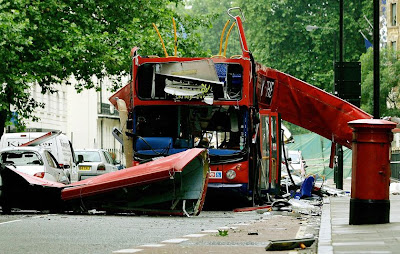 I remember seeing the footage on the tv, seeing busses ripped open like sardine tins. Carnage. And I was nowhere near what was being shown on my tv.

How would I feel if caught up in it all? I have no idea, but I feel outrage at the fact that it could happen there, at Ground Zero, in Israel, Iraq or Afghanistan. The fact that we can do these things to one another in the name of religion or politics, or supposed freedom.

I am especially moved by the stories of people affected by this sort of tragedy and who find it withing themselves the power and/or need to forgive their perpetrators as the only way to move on and heal.

I was particularly moved by Gill Hick's story, from the Forgiveness Project website. She was caught in the blast on the Piccadilly line train and miraculously survived but lost both her legs due to the explosion.: 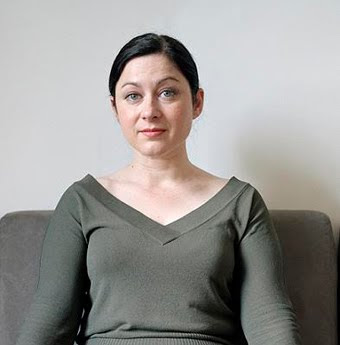 I wish the world would Stop – just stop and give us all the time to see what is happening. Why are we killing each other – everyday? It may sound naïve, simple, maybe too simple to take seriously – but – I don’t understand why we are ‘accepting’ and ‘tolerating’ war and destruction and famine and poverty and oppression. When will the final bomb explode? When will enough be enough?

The cycle has to stop – I can not hate the person who has done this to me; the cycle must end with me. I don’t see it as my place to forgive the act, yet I am compelled to understand – to offer an open heart, to try to hear and ask Why?

As I lay waiting, trapped in what resembled a train carriage – but was now a blackened, smoke filled indescribable ‘room’ of destruction and devastation – I was able to think. This period of time, some 40 minutes, was to prove to be the most insightful and blessed gift that I am yet to receive, apart from the ultimate gift of a second chance at life. As the blood poured from my body (despite the scarf I had tied on each leg as a tourniquet to stem the flow) I felt incredibly weak, fighting to hold on, to survive. There were two voices holding a very powerful, conflicting conversation in my head – one voice willing me to hold on, to remember those who love me and need me here, the other calling me softly to let go, to drift away into a peaceful deep and permanent sleep. Both sides were stating their case – asking me to choose between life and death. I thought about all the things that mattered to me –my then partner and now husband Joe, my brother Graham, my family, my dear friends – I wanted to spare them this pain. They gave me the strength to choose life. I made a decision and the conversation ended. I wasn’t going to die in the carriage, not there on that day; I had to wait for a light.

Help did come and each person who ’saved’ me did so not knowing who I was. It didn’t matter if I was rich or poor, black or white, female or male, muslim or jew, religious or not – what mattered to each of them – the police, the ambulance, the paramedics, the surgeons, the nurses –was that I was a life that hung in the balance, a life they were so desperate to save. I arrived at the hospital as ‘One Unknown’ – an estimated female.

When I awoke I was euphoric to be alive and to have survived. I feel like a very blessed person – filled with emotions of love and compassion and joy. I am able to appreciate life – but a different life than I had before, one that is rich and fulfilled and not consumed by anger and hatred.

I am committed to building Peace – to endeavour to eradicate ignorance in the world and to encourage mutual understanding. I don’t want to accept terrorism, we all deserve to live in a world that is not plagued by war and famine and poverty and oppression. We can change that – each and every one of us – each ‘one unknown’.

She has discovered an ability that most of us crave. To find our lives over-flowing with compassion and joy. This I believe is the power of forgiveness, the power to recognise each other not as 'unknown' but known to each other, and for those of us of faith, by God... Not the God of terror, or in whose name war is waged, but the God of love who accepted death, and transformed it into life and hope. I believe that every time that someone carries out an act of violence on another, on one of God's children... there are tears in heaven...

Forgiveness lies at the heart of the teaching of Jesus Christ. I hope and pray that I too might forgive like Gill Hicks.
Posted by Fr. Simon Cutmore at 9:57 pm