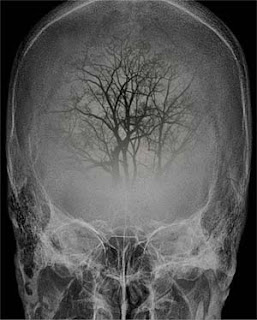 Not a good day really I have to say. All was going well this morning...

After having finally extricated myself from the kids' breakfast/dressing routine (today was an inset day for them - term begins tomorrow) I set down to deal with a lot of admin. I popped Spotify on and began to enjoy albums by Oceansize (the new love of my musical life), The Portico Quartet, and The Pineapple Thief. I was making good progress. Then...

About an hour or so into making headway, it started. It is almost spiritual as it comes over the horizon. The egg of molten lava behind my left eye began to hatch allowing it's nauseous core to seep into my system.

At first I tried to ignore it, but then the peripheral vision in my left I went and the pain ratcheted up a notch. I had to go out...

On my way home, I felt what had started to erupt in my head, begin to awake in my stomach and the first thing I did when I came through the door was be sick. Oh no... the inevitable decline.

I have spent the rest of the day in bed, sleeping, trying to push the pain out of my mind (no not literally), reading a little and managing to vomit the pain in my head out of my stomach. It's not very graceful.

This forced inactivity has made me think. I have received the love and care of my family. Especially touching was the reaction of my children who came in to see me in bed, holding my hand and talking gently to me. A little later my oldest (his own initiative) organised and brought up a glass of water for me and my younger sons came to ask if I wanted some toast or an apple. Touching... Most touching of all was my 2 younger boys brought me some of their favourite teddies to keep me company. They would want them close by if they were ill. So should I.

I have also reflected on how we take good health for granted, and we do. I have been reminded today of how fragile the line between health/ill health is and how being the one side of the line rather than the other can lead to enforced inactivity.

I don't get migraines very often and they tend to last about half a day. For that I am thankful, but there is also something deeply spiritual going on in the physiology. The loss of sight, the dulling of senses, the enforced slowness, even the pain are all best described using deeply spiritual or mystical language. I wonder what St Theresa of Avila, St John of the Cross or Mother Julian would make of what I have experienced today?

Mother Julian's Revelations of Divine Love were given to her after serious illness, and it is perhaps that which enabled her to see the fragility and yet sacredness of life at the closeness of all things to the heart of God. She saw God holding a tiny thing in his hand, like a small brown nut, which seemed so fragile and insignificant that she wondered why it did not crumble before her eyes. She understood that the thing was the entire created universe, which is as nothing compared to its Creator, and she was told, “God made it, God loves it, God keeps it.”

I am not trying to suggest that God was necessarily trying to reveal himself to me in between bouts of vomiting but I have prayed more than usual today (perhaps selfishly), I have been forced to be still and reflect on my lot, and I have received unconditional love. I am feeling significantly better tonight, and some words of Mother Julian ring in my ears, "... All shall be well and all shall be well and all manner of thing shall be well..." but does my afternoon get more spiritual than that...?
Posted by Fr. Simon Cutmore at 9:42 pm