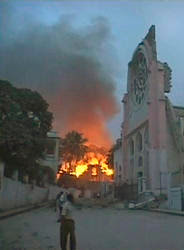 I have been moved to the core by the desperate tragedy of the people of Haiti. The situation there opens up the chasm of a question for people of faith - where was God?

I am not going to try and explain it away or offer some patronising nonsense about God walking the streets of Port au Prince weeping like Jeremiah.

In a country crushed by poverty, a poverty embedded by debt that my Government and the Governments of other Western nations hold in their glove-lined fists, I am left bewildered that their suffering could be made worse. And yet it has.

Why did you abandon them, like your Son on the cross? His crucifixion ultimately brought you glory. That paradox, brought us nearer to your glory. And yet their crucifixion over years and nailed home in recent days is, for me, the ultimate theodicy...

I feel moved with passion and with anger. Anger that this should have happened to such helpless a people (God that sounds patronising...) but with a passion; a passion for justice for them so please give as generously as you can to the DEC Appeal, a passion to understand your mind O God and for you to know my heart.

A friend of mine put it so well on her blog, '...all I know is that I was fully aware of suffering before I became aware of God, and so the two have to live alongside each other. I also know that prayer changes me and hopefully I become more compassionate and reach out to help alleviate or perhaps simply weep over some of the shit that happens...'

O God, our refuge and strength,
we hold before you the nation and people of Haiti,
and pray for healing in the midst of tragedy and devastation.
Give comfort to the homeless, the bereaved and the suffering,
courage to survivors,
wisdom to those who seek to help,
and light to all who live in the shadow of death.
This we ask in the name of Jesus Christ,
our rock and our salvation. Amen.
Posted by Fr. Simon Cutmore at 8:39 pm