Anish Kapoor and the Via Negativa... 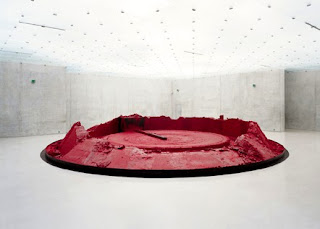 I have just watched the first of a new series of the BBC series 'Imagine.' The programme tonight was handed over to the work of British artist and sculptor Anish Kapoor. The excellent program is available to watch here.

Over the years I have become familiar with his work - especially his voids. These have been set everywhere for me, most notably in the Turbine Hall of the Tate Modern with his enormous 150m long 'Marsyas' and as part of the exhibitions in the Sir John Soane museum.

The thing that struck me about Alan Yentob's interview was Kapoor talking about his use use of colour. He went on to talk about his use of 'black' an example of which is above. The 'black' of course is a dark red. But it is the sort of black that you see as you close your eyes - blackness tinged with the redness of blood.

This all got me thinking about how Anish Kapoor's work therefore is an external expression of the inner world. In other words, his art, some of it massive, reveals something of what is going on inside him and each of us. Kapoor like Bill Viola is a true apophatic postsecular artist... an interesting article can be downloaded from here...
Posted by Fr. Simon Cutmore at 12:34 am