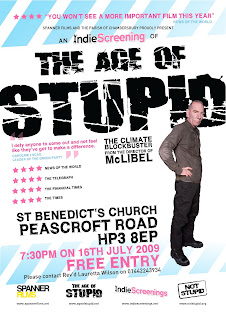 I have been to the first of 2 upcoming Indie screenings of the arresting 'The Age of Stupid' tonight. The next one is in Bennetts End on 16th July.

Even though I saw the film first on it's world premiere on March 15th I was still moved by the central message of the film and the data that unfolds as part of the central story. If anythings, having seen it again tonight I feel more convinced that it is my vocation to act on making people more aware of the reality of peak oil and climate change...

I believe it is my human vocation, but I believe that it is also my vocation as a Christian. Much damage has been done in the name of '...And God blessed them, and God said unto them, Be fruitful, and multiply, and replenish the earth, and subdue it: and have dominion over the fish of the sea, and over the fowl of the air, and over every living thing that moveth upon the earth...' (Genesis 1:28.)

Having dominion over... Wikipedia tells us, '...In English common law, the dominions of the Crown referred to all the realms and territories under the sovereignty of the Crown, e.g. the Order-in-Council annexing Cyprus in 1914 provided that "... the said Island shall be annexed to and form part of His Majesty's Dominions and the said Island is annexed accordingly...' Dominion implies being a subject of the Empire.

When God tells human beings to have dominion over the fish and so on, are human beings not being asked to treat everything that lives as being under the authority of the King - namely God? It is therefore not our dominion that we are being asked to exercise - but God's.

Therefore, we need to ask, how does God view the whole created order? How does He treat it? In short we need to turn to words of Jesus to guide us. Jesus said, '... For God so loved the world that he gave his one and only Son, that whoever believes in him shall not perish but have eternal life...' (John 3:16.)

God loves the world. All that is. Not just Christians. Not even all people. God says He loves every thing indeed in Genesis 1, He is described as seeing all that He has made as good. God loves everything, and therefore, as as we are made in His image, we must act as He would. We are called love all that there is as God does. This implies are respect and a reverence as everything has the fingerprints of the Creator on it.

Go and see the film. Change your life. Fly less. Reduce your emissions. Drive less. Cycle more. Check out the website. It is your vocation to act
Posted by Fr. Simon Cutmore at 11:00 pm