I am now in that limbo time between posts. Having had a very full and moving farewell from Leverstock Green and the Benefice of Langelei, I now have a period where I am readying myself for ministry in the Parish of Mill End and Heronsgate with West Hyde.

During that time, each day I will be praying for the 3 distinct communities ofg the parish using the collects for the patron saints of the churches: St. Peter, St John and St. Thomas Becket. 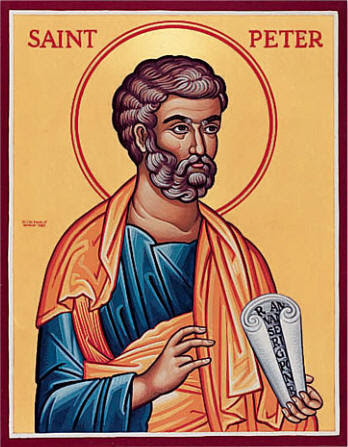 Peter has often been called the 'Prince of the Apostles' because of the words of Jesus re-naming him, from Simon to Cephas. This was the Aramaic form of the Greek word Peter, which means 'rock'. Jesus said that on this rock he would build his Church. Peter, after his proclamation of Jesus as Christ and Son of God, Peter spent the rest of his life and ministry witnessing to the Lordship of Christ. He was martyred in Rome in about the year 64.

So I pray for the people of Mill End:

Almighty God,
who inspired your apostle Saint Peter
to confess Jesus as Christ and Son of the Living God:
build up your Church upon this rock,
that in unity and peace it may proclaim one truth
and follow one Lord, your Son our Saviour Jesus Christ
who is alive and reigns with you,
in the unity of the Holy Spirit,
one God, now and forever. Amen

And so I pray for the people of Heronsgate:

Merciful Lord,
cast your bright beams of light upon the Church:
that, being enlightened by the teaching
of your blessed apostle and evangelist Saint John,
we may so walk in the light of your truth
that we may at last attain to the light of everlasting life;
through Jesus Christ your Son our Lord,
who is alive and reigns with you,
in the unity of the Holy Spirit,
one God, now and forever. Amen

Thomas was born in London in 1118, of a family of merchants. After a good education he served as clerk to another burgess then entered the service of Archbishop Theobald of Canterbury. Thomas proved himself an excellent administrator and skilled diplomat. In 1155 he was appointed chancellor by King Henry II. For several years king and chancellor worked harmoniously together in mutual admiration and personal friendship. As a result, the king nominated Thomas as Archbishop of Canterbury to succeed Theobald in 1161. From the start there was friction, with Thomas insisting on every privilege of the Church. The conflict worsened until 1164 when Thomas fled to France. Encouraged by the Pope he continued his arguements with the King from there, sending letters and pronouncing excommunications. Three efforts at mediation failed before an apparent reconciliation brought him back triumphant to Canterbury in 1170. But the nobility still opposed him, and words of anger at court led four knights to journey to Canterbury where they finally chased Thomas into the cathedral, and murdered him on the steps of the altar on this day in 1170. Thomas was undoubtedly a proud and stubborn man, for all his gifts, and his personal austerities as archbishop were probably an attempt at self- discipline after years of ostentatious luxury. His conflict with King Henry stemmed from their equal personal ambitions, exacerbated by the increasingly international claims of the papacy, played out in the inevitable tension between Church and State.

And so I pray for the people of West Hyde (Maple Cross):

Lord God,
who gave grace to your servant Thomas Becket
to put askide all earthly fear
and be faithful even to death:
grant that we, disregarding worldly esteem,
may fight all wrong,
uphold your rule,
and serve you to our life’s end;
through Jesus Christ your Son our Lord,
who is alive and reigns with you,
in the unity of the Holy Spirit,
one God, now and forever. Amen
Posted by Fr. Simon Cutmore at 12:43 pm