H/T to Paul Roberts. A personal and deeply moving post from his blog

Silence on the blog was largely caused by a trip to New York and to Yale a week ago. It was my first trip there and was for fun. The theology took place in Yale where I was presenting at the Liturgy and Migration conference run by the Institute of Sacred Music and Liturgy. 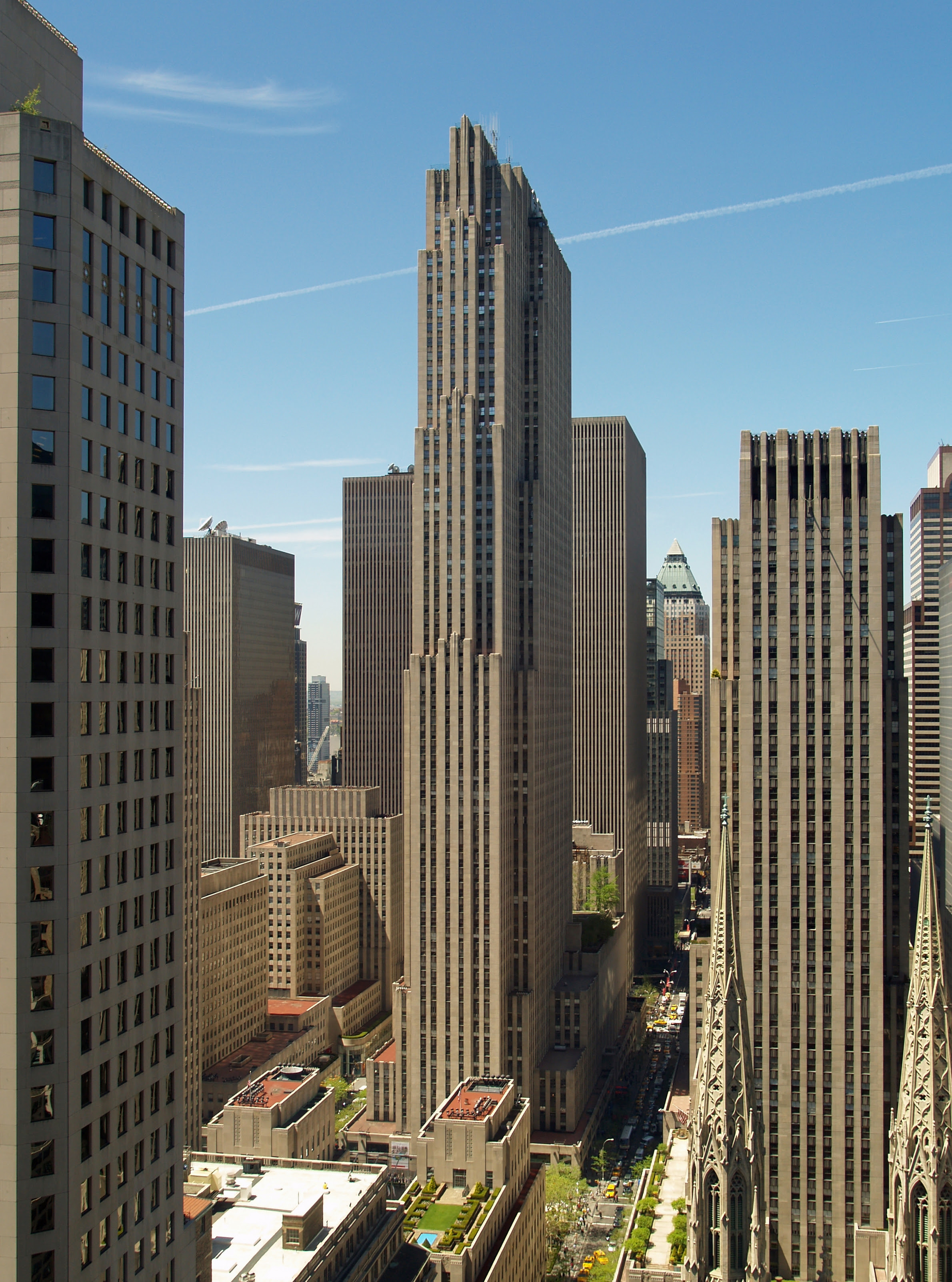 We had a great time in New York, spending four days doing most of the obvious sights available to someone lodging in mid-Manhatten. But I was caught on the hop by my reactions to the Rockefeller Center. John D. sounds a thoroughly nice guy who liked to do things philanthropically, especially by taking a big risk building the Center with his own money when all other sponsors had pulled out in the wake of the stockmarket crash on Black Tuesday. By going ahead anyway, he provided much-needed employment at a time when noone else was hiring. All the more surprising, then, how negatively I reacted to the frescos within the center and Rockefeller’s credo which is placed on a stone at the front of the building.

The frescos in the Center are a celebration of the achievements of Man (sic) and human progress, which are unmitigatingly positive, combined with a sculpture of Prometheus. Rockefeller’s credo reads thus:

I believe in the supreme worth of the individual and in his right to life, liberty, and the pursuit of happiness.
I believe that every right implies a responsibility; every opportunity, an obligation; every possession, a duty.
I believe that the law was made for man and not man for the law; that government is the servant of the people and not their master.
I believe in the Dignity of labour, whether with head or hand; that the world owes no man a liking but that it owes every man an opportunity to make a living.
I believe that thrift is essential to well ordered living and that economy is a prime requisite of a sound financial structure, whether in government, business or personal affairs.
I believe that truth and justice are fundamental to an enduring social order.
I believe in the sacredness of a promise, that a man’s word should be as good as his bond; that character not wealth or power or position – is of supreme worth.
I believe that the rendering of useful service is the common duty of mankind and that only in the purifying fire of sacrifice is the dross of selfishness consumed and the greatness of the human soul set free.
I believe in an all-wise and all-loving God, named by whatever name, and that the individuals highest fulfilment, greatest happiness, and widest usefulness are to be found in living in harmony with His Will.
I believe that love is the greatest thing in the world; that it alone can overcome hate; that right can and will triumph over might.

My inner reaction was one of initial sadness, then revulsion, and eventually growing horror. What on earth was wrong with me? After all, it is the credo of a man who is trying to work out what is best for his fellow humanity.

I had come face to face with my own Augustinianism. This was a wonderful creed, which aims at the best for everyone, but ultimately bases its faith solely upon the human being, albeit with some niche found for faith in the penultimate article. (There’s also a niche for Jesus in one of the frescos, although his teaching is largely re-interpreted as moral, subjected to John D’s meta-religion, rather than actually upon its content.)

The sadness-revulsion-horror was because I could not square this monument of 20th century rationalist humanism with the history immediately preceding and following it. The glorying in human cleverness was unremittingly positive, yet it had been preceded by the slaughter of WW1, the trajedy of the Great Depression and was about to be followed by the gulags, the gas chambers and nuclear vapourisation. What kind of blind faith manages to sing a triumphant hymn of praise to homo sapiens when sandwiched by such huge, appalling examples of the flawed nature of this faith’s subject+object? On the other hand, I was also disturbed by my own vehement reaction: was I also in danger of lurching into some kind of reactionary Manichaeeism?

I didn’t sleep too well that night – possibly I was still jetlagging. My dreams were filled with images of the frescos and all the hundreds of skyscrapers which characterise the island of Manhatten. That same day, earlier in the morning, we had stopped to look over Ground Zero. It’s one enormous building site at the moment, with little evidence of the atrocity which took place there. The aim is to open the memorial on the tenth anniversary this coming September 11th. Was all that terrible act caused by religion – of the kind which was probably fuelling my reaction to John D’s humanism? Or was it caused by human nature, masquerading as a religious impulse? Whatever the cause, the images of Ground Zero and the Rockefeller were overlaiden in my disturbed sleep.

These days, I am convinced that the most important philosophical and theological questions are around anthropology (the nature of human beings), since it is on this subject, paradoxically, that the big divide exists between theism and atheism – rather than over the nature of God. (The absence of divine phenomena is not an overwhelming problem for theistic religions. It would be really naive faith which hitched its theistic waggon merely to phenomena.)

The first twelve chapters of the Book of Genesis are a bittersweet story, commencing with the wonder of creation, then outlining the paradoxical nature of human beings and their broken relationship with the Creator. In it, we have the story of the first skyscraper, the tower of Babel. (Chaper 11). The text says, “Then they said, ‘Come, let us build ourselves a city, and a tower with its top in the heavens, and let us make a name for ourselves; otherwise we shall be scattered abroad upon the face of the whole earth.’” God, with the divine council, responds with a counter-concern (verses 6-8):

And the Lord said, ‘Look, they are one people, and they have all one language; and this is only the beginning of what they will do; nothing that they propose to do will now be impossible for them. Come, let us go down, and confuse their language there, so that they will not understand one another’s speech.’ So the Lord scattered them abroad from there over the face of all the earth, and they left off building the city.

As with many occasions in the Bible, God and humanity are struggling against one another. Human power is a real thing and God in this passage seems to see it as an increasingly negative thing, having no limit. So, the story tells us, the differentiation of speech was an intentional limitation upon the technological power and intellect of humanity, since such power and intellect was flawed, oriented to itself, rather than the creator.

Well, we build our towers now. The skyscrapers of Manhatten have served to raise, artificially, the height above sea level of the average New Yorker by about, say, 50 – 100 feet. If the tower of Babylon was left unfinished, the Rockefeller Center nevertheless scrapes the clouds in its triumphant proclamation of Man, with John D’s credo at its base acting almost as an exposition of Genesis 11:6. There is as much danger in having an overly negative view of our humanity (Manichaeeism) as there is an overly positive one. Concerns with a dangerously positive assessment of human nature should not lead to an equally (and possibly more) dangerously negative assessment, which results in misanthropism. All humanity is to be valued and cherished because we are created, not hated because of our obvious capacity for evil. The whole incident indicated to me the challenge of constructing a realistic anthropology which is honest about human evil, human genius and human beauty and love. Christian theology’s potential gift to the world is a system which can hold those things together. But to do that, still requires a submission to the Being of God as the origin of all things and, ultimately, the Lord of all things.

My final dreams lingered around the image of a little child building a sandcastle, then another coming along and kicking it over out of jealousy. Heaven help us: human nature, in all its beauty, needs some fundamental healing and the longer we walk this planet, the more obvious it seems to me, that we cannot fix ourselves by ourselves.