Silence on the Mountaintop 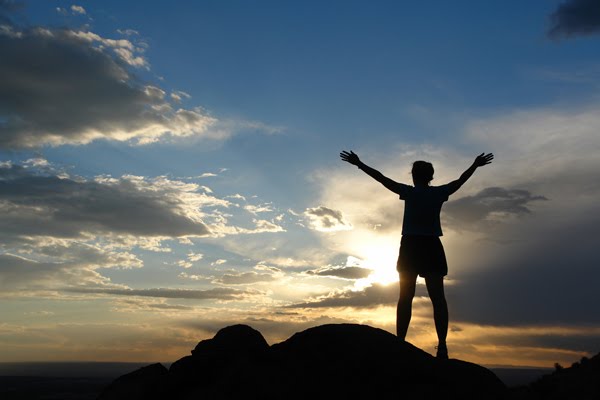 Here's a version of what Tim Bourne, who is one of the Lay Readers here, preached this morning, based on the readings for the day which can be found here.

~~~~~~
Today our readings lead us to think about the Transfiguration, when Jesus was acknowledged as God's own son in the presence of his closest friends, Peter, James and John. This is the last Sunday of Epiphany, the time in the church's year that began after Christmas with the baptism of Jesus, marking the beginning of his ministry, and ends now with the Transfiguration, marking the end of Jesus' ministry of travelling and teaching and healing, and the beginning of the period of Lent that leads us to the foot of the cross. It's a landmark moment; Peter didn't know how to react, and perhaps neither do we.

There's something about being on a mountain. We no longer believe that the earth is flat and covered by a great dome, with heaven above it, but somehow there's still a feeling of being somehow closer to God, “closer to Head Office”, as a friend of mine put it.

This isn't something new. In today's Old Testament reading, which you can find on the Bulletin, we learn how Moses was given the Ten Commandments on top of a mountain covered in clouds.

So as Jesus' disciples climbed with him “up a high mountain”, they may have felt a growing sense of God's presence. Then when they reached the top, suddenly His glory became real and visible, and God himself spoke to them out of the cloud: ‘This is my Son, the Beloved; with him I am well pleased; listen to him!’

This moment was important to Peter, and it remained vivid in his memory, as we can see from his account of it in his letter, our New Testament reading.

As our gradual hymn we sang “Be still, for the presence of the Lord is moving in this place.” When God is most visibly and tangibly with us, often the most fitting thing to do is to be still and treasure the moment.

There are times when we should not be doing anything, not even speaking, just being still and listening.

Lent starts this week, and that’s a good time to think about the role of silence, both when we’re together and when we’re on our own. Not just to listen, although that’s important

Also to give ourselves time to “tune in” to God

There are many ways to pray, and finding the ones that work best for me, or for you, is not easy.

Silence can help us all, but we may need to use it in different ways - there is no one right way to pray.

- think about a bible passage - imagine you’re a character in a bible story - look at something in nature, perhaps a leaf, and think about the God who made it - use a book about prayer

Another aspect of prayer - it isn’t all asking, and it isn’t all thanks, or praise. When you’re with a close friend, there are times when you don’t need to talk; it’s enough just to be together. Peter just had to say something Have you felt like that? We feel that something has to be said to break the silence , but we’re probably wrong, just as Peter was.

Yesterday I was at a Reader trainee selection conference. We had two striking demonstrations of the power of silence.

On the negative side, during an interview one of the candidates was apparently so afraid of silence that she talked non-stop, and there was barely a break long enough for us to get a question in! Probably it was mostly nerves, but we did wonder what would happen if she led a discussion group! Don't worry – we had a laugh about it afterwards, but she did get selected for training.

The candidates are asked to take part in leading worship at some point during the day, and on the positive side we were all struck by the way one of them made careful use of silence, and pauses when speaking, to heighten the sense of God's presence.

Words are sometimes necessary, but if God speaks through us, it’s more likely to be through who we are and what we do, rather than directly through our words.

Silence is a friend, not an enemy; don’t be afraid of it.

This Lent, why not give some time to just being quiet with God, in whatever way works for you.
Amen.
Posted by Fr. Simon Cutmore at 9:06 pm