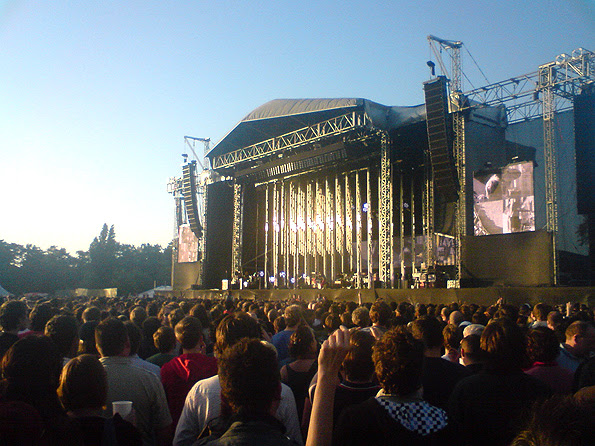 I am inspired to write this as I watch Radiohead from the Reading Festival as it sends shivers up my spine reminding me of when I saw them last summer in Victoria Park. And what a set it was...

I have to say that tonight's is equally good. It reminded me of Rhidian Brook's excellent thought for the day, which I still relate to, and enclose below...

This week I was at an outdoor rock concert - something that's now as sure a fixture on the summer calendar as Wimbledon or a Bank Holiday. Half way through a beautiful song by the band Radiohead my friend, who as far as I know has no religious affiliations, turned to me with tears in his eyes and said that he was having a religious experience. He wasn't being glib. Something was happening in that moment; something powerful enough to make him cry, embrace me and for both of us raise our hands in a gesture of abandoned praise. We both knew, without saying so, that we weren't worshipping the band - great though they are - and that this 'something' was about more than just music.

But what was it?

Of course, I can I explain it all rationally: the sonic vibrations coursing down the cerebral cortex, the mass gathering of people and the quantity of beer were all combining to produce a heightened feeling of euphoria. But should I write off what my friend was saying purely on the grounds of it being just a feeling? I think he was experiencing something that many of us do but can't always name - that sense of something beyond ourselves and the feeling of rapture and exaltation that goes with it The music - like stunning scenery or a fine painting - was really just a window through which he caught a glimpse of 'the other', the something beyond the veil of what we can see with our eyes and explain with our minds.

As the apostle Paul - a man who had a spectacular 3D religious experience - once put it: 'since the creation of the world God's invisible qualities can been clearly seen all around us.' In all that is beautiful and excellent, in all that is good, creation shouts and whispers the rumour of the divine.

I think those tears at the rock concert were a response to the same force of divine Love that revealed itself to Paul; but I also think there's more. The theologian Rudolf Otto - who called this sense of 'the tremendous' or the mysterious - 'the numinous' -also said that a religious experience required an ethical dimension. Implying that the full measure of the religious experience was not how spectacular it was - but the fruit it bore. A special effect needs to have a special effect.

When the prophet Isaiah' had his fantastic encounter with God his response wasn't so much wow! but woe: 'woe to me for I am a man of unclean lips' he said. And it's this response rather than the seraphim or the blinding light figure on the throne that makes it meaningful. The experience lead to an instant inner transformation. And interestingly, Isaiah doesn't go and tell people about the vision. He tells them to turn to God, to help the sick and the poor and broken. Or as Paul himself bluntly put it: if you really want a religions experience go and look after the widows and the orphans.