What belongs to God? 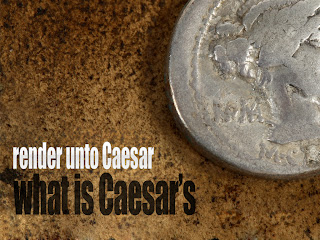 You know you are in trouble when your enemies begin to flatter you: Kind words and Very Unkind Intentions. “Now, tell us, Jesus,” they continued, “is it lawful to pay taxes to Caesar, or not?”

By “lawful,” of course they meant “according to Torah.” Any of Our Lord’s responses could have got him into trouble with one faction or another.  If Jesus said that a good Jew should support the Roman state, then he would have allied himself with a power that was occupying Israel and killing Jews. That would have alienated the Jews and given implicit approval to a state that regarded its ruler as a god. It would have been idolatry. But to say that Jews should not pay taxes to Rome would have been treason. The question was a perfect trap for Jesus.

“Is it lawful to pay taxes to Caesar?” It was a good question then, and it is as difficult to answer today as it was two thousand years ago.

There is much to say in favour of Jewish or Christian support of the state. The state maintains order; it keeps the roads paved; and it operates schools. Even the Romans, for all their brutality, created a system of roads that ran the length of Europe. It took less time to send a letter from Athens to Rome in the first century when Rome was at the pinnacle of its power than it did in the 11th century when Europe was divided into hundreds of small kingdoms. Under Roman rule, we and the whole of Europe enjoyed a standard of living that fell drastically after the Roman state disintegrated and was not recovered until the late 19th century.

Yet, the Roman state was brutal. Persons found guilty of treason were hung or nailed to a cross and left to bleed to death and asphyxiate; it was the cruellest form of capital punishment ever devised. Men and women flocked to the circuses or amphitheatres to watch convicted criminals fight wild beasts.

One of the interesting things about this story of Jesus’ encounter with the Pharisees and the Herodians is that he never answers their question.

“Show me the money for the tax,” Jesus demanded. And they produced a Roman coin. As Jesus held it up, it glinted in the sunlight, and Jesus asked, “Whose likeness and inscription is this?” The coin would have borne the image of Caesar, much as our coins display the profile of our Queen. Finally, Jesus said, “Render therefore to Caesar the things that are Caesar’s, and to God the things that are God’s.”  Well, that settles the question, doesn’t it? There are things that belong to Caesar, like the money with which we pay our taxes, and there are things that belong to God. Such as…? Well, what? There’s the problem.

The question Jesus threw back at the Pharisees and Herodians echoes Genesis. Holding up the coin, he asked, “Whose likeness or image is this?” The image of Caesar was imprinted only upon coins; but the image of God is upon every human life. The fingerprints of God are on us all.

“The things that are God’s.” The way most of us behave suggests that we believe that God has a claim on about one hour per week and a small percentage of our income. But God’s mark is upon every particle of our being.

Many parishes today will hear sermons on stewardship today, many parish priests will ask people to consider how much they should pledge to the church. But the real question is not how much we should give to God or the church or how much belongs to Caesar, but how much belongs to God? And if we ask that question, then the real issue of stewardship is not “How much should we pledge?” but “How much should we keep for ourselves?”.

All that we are and all that we have belongs to God. But we belong to God not as slaves but as children and if children then heirs. Rendering to God what God has a claim on is not burdensome; it is liberation. We cannot divide our lives between God and Caesar. Realizing that life is whole and not fragmented is an insight that brings us freedom. It teaches us that our first and foremost priority is the service of God.

If you, like many people, feel many claims upon your time and finances and energy, then it is freeing to realize that in reality is that there is only one claim upon our lives: to serve God in joyful freedom.

Yes, my dear friends, there are Standing Order forms that you get and fill in and return, and yes, there are Gift Aid Envelopes and as you all know, there is a whole host of mission and outreach which needs to be underwritten both here in this parish, in the diocese and internationally, but we gather here to give ourselves, and through that we bear fruit for the Mission of God in this place. Your prayer, your activism, your community engagement with the young, the disaffected, the old and the isolated, and yes, quite importantly, your money is a response to Him who gave it to us in the first place.

“Render to God the things that are God’s.”

Every bit of you.

Email ThisBlogThis!Share to TwitterShare to FacebookShare to Pinterest
Labels: all, Caeser, God, Jesus, of, render, us