Advent Sunday - The Word as a Wordle 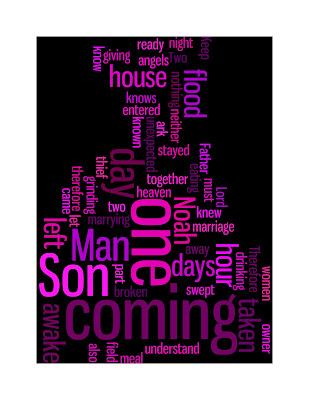 Here is the gospel reading for Advent Sunday from Matthew 24:36-44, as a seasonally coloured Wordle...

It is interesting to note that the Wordle highlights the words son, man, one and coming. The Son of Man is one who is coming.

Who or what is the Son of Man? It seems that the phrase over the centuries has meant different things. In the very earliest times it referred most probably to a human being or one's self. For example in the Old Testament in Numbers 23:19

Later in the Book of Ezekiel in chapter 2:

Son of man here appears to be a title referring to the humanity of the author, much how the word "human" may suffice in English. It is not a respectful appellation, but a humbling one (in some cases, an arguably abject one), and this use is a consistent pattern throughout Ezekiel.

In other words, the son of man, is a downtrodden figure that the prophet Daniel then links with a divine figure, the coming Messiah, a theological link that was strengthened during the time before New Testament.

In the New Testament, Jesus uses the term in similar ways, but some think he might just be referring to humanity generally.

How do we deal with this this Advent? The Son of Man is coming - that's what Advent is about. Getting ready for the arrival of the Messiah figure - God's chosen leader who would forge a new relationship between humanity and God and free humanity from the oppressive regime that they were bound by. Then it was a longing for a Divine King freeing people from the rule of the Romans. Today it might be a longing to be freed from debt, from habit forming behaviours and led to a better way of living. Or if the Son of Man refers to the whole of humanity, then a longing that a better 'version' of humanity is coming, is made possible by God. Either way it is a hopeful vision indeed... God's take on things, is that He longs to free us and enable us to be the people that He and we (however deep down we may need to look) long to be...

Thanks for this (rare) piece of useful sanity in blog and twitter-land today.

surely it is (if you take the original meaning) the "new humanity" that is coming, not just a longing for it? Aren't we moving towards fulfilment in either meaning?

God wants us to be free to be the people we long to be... is I think what you say. But shouldn't we be hoping/longing to be the people that God made us to be, rather than letting our own desires dominate? Or am I reading you wrong?

'adam of course is not gender specific (see http://jamesthevicar.com/wordpress/2008/07/29/adam-male/) so ben-adam could be rendered "Son of humanity" or "born of human" or something along those lines. This brings to life the state of the whole of humanity and so the enormity of what is wrought by the "new adam" - the new human.