What follows is a lengthy (read that as too long - it will be shortened by Sunday) address on Luke 8:22-25 at the Baptism of Esther and Elijah Masters...


It has been a week of high emotion in our house...

Firstly, to much delight, my sister gave birth to a healthy and beautiful baby girl - Isabel at 1.35 am on Sunday 31st. Her arrival is such good news, family-enriching, smile-inducing, love-sharingly wonderful and there is a spring in my step because of her.

Our kids are just so delighted because they are the youngest cousins in the family, but no more! The delight, especially on our youngest's face at being 'a big cousin', is nothing short of life-affirming. Beautiful, isn't she? 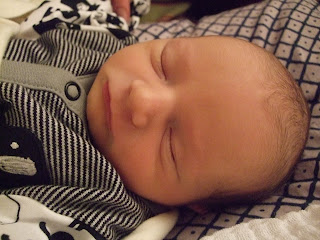 And then on Sunday night, I heard from a friend with news that almost shook the joy out of me. A man who I had known in another place, in another time, had decided that he could cope no longer and met his Maker on a railway line... My rejoicing at new life and love was then overwhelmed by the dark shade of death. My earlier 'wows' were turned to 'whys.' This morning’s Gospel challenges me to accept that Jesus is with me in the peaks and troughs on life’s sea...

How Jesus can sleep through a storm is beyond me! I have reasonable sea legs, but sleeping in what would have been a smallish fishing vessel seems a little unlikely. We also need to remember that amongst the dispels were some experienced fishermen so they would have handled all sorts of weather out on the lake before - they were concerned for their safety and that of the boat so it must have been very rough. They wake Jesus and instead of helping steer the boat, or maybe even bail it out, instead he commands the winds and the waves to stop and they obey - this sort of mastery of the elements is something that only a god could do - who is this man? Prior to this event, the disciples had been experiencing the profoundest mystery - Jesus the teacher, Jesus the healer, Jesus the miracle worker - whilst a man, Jesus also clearly possesses something of the creator God about him. It strikes me that the disciples had every right to be frightened whether Jesus was awake or asleep!

The disciples needed Jesus when faced with danger and the limits of their mortality. They, like so many people cry out to God in Jesus, when in danger. They recognised that the only person or thing that could save them was God. Once awake and all is calm, Jesus asks the disciples - where is your faith? Did they really think that God would let them and Jesus die like this? Did they really think that this was it? Even though God was with them, agreed asleep, in fear of their lives they forgot that he was there and they assumed that they were alone.

Your actions define who you are. Jesus’ actions and words reveal him to be the friend of fishermen, but also creator of the universe with power to control the physical world for good and the will of God. The disciples’ actions and words reveal their lack of understanding of the great love story of God and humanity running from the moment of creation and reaching it’s high point in Jesus. Their actions and words also reveal a very real understanding that the only person who can help them when confronted with danger, uncertainty and ultimately death is God himself in Jesus.

Your actions define who you are. This is true of us. We say and pray and sing that we are following Jesus, listening to him teach, and trying to live it out, and yet all too often we leave all of that however good intentioned, at the church door. As we re-emerge from church into the storm of Monday to Saturday we assume that Jesus is still sleeping on the cushion in the boat. We like those disciples forget all too easily that here we have spent quality time with a friend of fishermen but also with creator of the universe with power to control the physical world for good and the will of God. All too easily we forget that from Monday to Saturday we live no differently to anyone else - only calling on God is crisis situations. We all too easily forget Jesus words, ‘I will never leave you or forsake you’, ‘I am with you always till the end of time’ and ‘the kingdom of God is among you...’

Your actions define who you are. Mark’s account of this story tells us that the disciples took Jesus out in the the boat just as he was. I guess that means they took Jesus out onto the lake in the boat where he had spent most of the day teaching. But, it’s a strange phrase ‘just as he was.’ Yet Jesus teaches in parables from this boat just as he was, telling stories about birds, seeds and trees and most people went home scratching their heads wondering when they would see a miracle.

The disciples took this man who is God just as he was into the storm and their actions defined who they were in terms of their faith, and his actions revealed that there was more to him that met the eye. But they took him out just as he was nonetheless. Our continued challenge is to do one better than those disciples - to look at this man and nevertheless see God on Sunday and take him out ‘just as he was’ with into a world filled with storms. We need to trust that he is with us always and his kingdom is among us.

Jesus asked his disciples ‘where is your faith?’ a question he asks us too in times of suffering, turmoil, doubt and darkness. Where is your faith? Either we believe in a God who can act and who can break through and change the present, or we hold on to some sort of myth, but that sort of God makes no difference in our world.

C.S Lewis is put it so eloquently...

‘...I am trying here to prevent anyone saying the really foolish thing that people often say about Him: 'I'm ready to accept Jesus as a great moral teacher, but I don't accept His claim to be God.' That is the one thing we must not say. A man who was merely a man and said the sort of things Jesus said would not be a great moral teacher. He would either be a lunatic -- on the level with the man who says he is a poached egg -- or else he would be the Devil of Hell. You must make your choice. Either this man was, and is, the Son of God: or else a madman or something worse. You can shut Him up for a fool, you can spit at Him and kill Him as a demon; or you can fall at His feet and call Him Lord and God. But let us not come with any patronizing nonsense about His being a great human teacher. He has not left that open to us. He did not intend to...’

We have to make a choice, Elijah and Esther have today through their baptism. Are we aware that Christ is with us, wherever we are, whatever we are doing, just as we are, in joy and in tragedy? We are called to become so aware of His presence so when we are faced with crisis we let His life in us define who we are. Amen
Posted by Fr. Simon Cutmore at 11:10 am