Lent As A Habit Forming Season

I discovered this week that some psychologists reckon it takes around 6 weeks for us to break out of the cycle of a habit, 6 weeks to become used to a new ways of living or thinking or acting. When we are struggling with a new discipline or skill, that period of time can feel like forever - will we ever master it.  It is an interesting accident perhaps that Lent now lasts around that length of time - 40 days - as we seek to grow in faith and become disciples of Jesus once again.

This morning’s Gospel takes place in the wilderness. Many of us hear the word desert here, but Mark is clear - this is the wilderness. It is a sparsely populated place between conurbations but it is not lifeless, but it can be dangerous as it is where wild animals live that may attack a flock; it is where bandits dwell that may attack at the roadside. It is also a place to where people flee from their problems to seek safety but it is also somewhere that one may be driven against one’s will to confront them in both cases the stories of Moses and Hagar are good examples. The wilderness was also a place of encounter - for many including John the Baptist and the Essene community who wrote and cared for the library of books we know as the Dead Sea Scrolls - it was a place to go to get away from the noise and bustle of the urban environment, and in a different physical landscape to allow the inner landscapes of our hearts to encounter God. It was a strange dangerous and spiritual place. A places where if you were to survive you needed to rely on the provision and protection of God.

'...And just as he was coming up out of the water, he saw the heavens torn apart and the Spirit descending like a dove on him… 12And the Spirit immediately drove him out into the wilderness...'

If you type the word retreat into Google you end up with pages of listings of days of yoga, spa, fitness, reading, writing and the opportunity to book luxury apartments. The popularity of retreat has gone exponentially through the roof as it were. The ‘because your worth it’ culture in which we live has discovered the need for some sort of self care. In the most extreme cases, the number of 30 and 40 something who are now taking silent retreats as a way to detox from this digitally noisy instant news world. This counter culturalism remains so fascinating that it pops up on tv too, most recently on BBC4’s ‘Retreat: Meditations from a Monastery’ which had no commentary but filmed some of the daily lives of monks and allowed their life to be the soundtrack was not voyeuristic but entrancing and enticing. 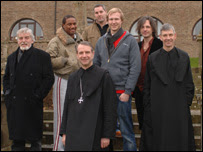 For me at least, the most transforming of these sorts of programmes was simply called The Monastery and was based at Worth Abbey. 5 individuals lived the life of a monk there for 40 days and it had a transformative effect: It is fair to say that everybody on the show had been affected by their participation in some way. Four out of the five had either changed their job, or were going to change their job soon, and all it seems had utterly transformed the focus of their lives and their faith.

It is interesting to note that it is God the Holy Spirit that literally throws Jesus out into the wilderness. And part of Jesus being there for 40 days is to make him the new Moses linking the 40 years that Moses lead the Israelites, but I also noticed that Jesus is the new Noah too. Noah sent out the dove which returns with an olive twig in its beak indicating that the land was dry and a new start can be made, so the dove descends on Jesus According to St Gregory Thaumaturgus, the Father is “pointing him [Jesus] out right there as the new Noah, even the maker of Noah, and the good pilot of the nature which is in shipwreck.”

The glory of the new Noah is greater than the old. The first Noah’s righteousness preserved his own life from the flood. By contrast, the righteousness of this new Noah leads to his death, that a “shipwrecked” world might be “piloted” to resurrection life. And it is this rediscovery that we are encouraged into during these days of Lent.

The wilderness may times for us where we feel spiritually dry and lifeless. Where we feel barren, broken or alone. Times where need exist one day at a time - only just getting through. We all have experiences like that even if we are not brave enough to admit to them to ourselves let alone to others. God the Holy Spirit forced Jesus into that same environment as he entered the wilderness. Mark only gives us scant details - he was tempted, he was in with the wild beasts (a reference in the Old Testament to oppressive leaders in surrounding nations so here perhaps referring to the wild environment and the real challenges of existing safely there) and the angels waited on him (in other words God cared for him through it all.)

As we begin our journey into the Lenten wilderness some thoughts: Jesus must have experienced brokennesss and loneliness in that environment and in it God cared for Him. When we experience the wilderness internally where we feel lonely and uncertain of a direction - God loves us and cares for us - even when it feels like all around is barrenness bleakness. If you are not in this place I encourage you to reach out to someone here, or someone you know who is, and gently love them. You will be an angel waiting on that person. And if you are in that place, and all you see is rocks, sand and wild animals - know that one of those animals will be a hand to love and care for you and not attack you.

Lent can also be a place where God’s spirit drives us. It is not a time and place of austerity for penitence’s sake, but it is the gift of time to rediscover what it means to be a disciple - which is what it means for us to be Christian.  In our urban, visually noisy world which is still looking for an alternative way of living, there is a hunger for stillness and space, I encourage you to model it - find some time each day to detach yourself from the world. To find some space and enter a wilderness of silence for a few minutes each day: to intentionally stop, still down, be silent, maybe quietly reciting a simple prayer like the Jesus Prayer or a favourite verse of scripture - and invite Jesus, the New Noah, to lead you through the tricky landscapes of your heart and life - the bits that only he and you see - so as to learn once more how live the life of Resurrection hope again in 6 weeks time.
Posted by Fr. Simon Cutmore at 7:04 pm