Ahhhh, my much missed blog. It's not that I've not had stuff to say as such, it's been the fact that I have been processing stuff differently of late. I also haven't shared any sermons here for quite some time. Here though is SUnday's for Advent 3 based on the reading from Isaiah 61.

'...Debris
Flickering shadows
In the mind
The dead are present
Even when we forget them
Even in the words we fail to speak
But when concerned observers
Publish words of anger or distress
Attempting to be the voice
Of those who have lost the most
We’re left with little more
Than dust on our lips...'

These are the closing words in the last stanza of Fr. Alan Everett’s poem ’14 June 2017’ about the fire at the Grenfall Tower. Words that are still pertinent following the service of remembrance for the 71 people who died in the tragic fire on 14 June. Emotions still run high as some locals want the tower torn down whilst others want it to stand as a permanent reminder - an indictment of unheeded warnings and management failings.

In some senses Fr Alan’s poem could be on the lips of the exiled residents of Jerusalem. After the Babylonian sacking of the city in 587 BCE, when the city and temple were laid to waste and the residents were marched off into an uncertain future in Babylon. The mourning in Isaiah 61 rises out of frustration and humiliation over the failure to rebuild the city and the temple to match its former glory and the failure to reconcile the economic disparities and the religious and political factions within the city. The reality of life in Jerusalem was nothing like the expectations for a restored Jerusalem and a righteous community as proclaimed by the prophets and as envisioned by the returnees. Their hopes and dreams remained crushed and the renewed infrastructure and architecture were memorials to failed leadership and lack of vision.

‘The spirit of the Lord God is upon me, because the Lord has anointed me; he has sent me to bring good news to the oppressed…’ Desmond Tutu I think it was once said that the gospel, good news from God, to a hungry person is bread. Hope in that sense is incredibly practical and at it’s best utterly transformative and rooted in the real life situation that someone finds themselves in. If you type ‘stories of hope’ into Google you end up with tale after tale of people finding some light in the midst of the darkness of extreme poverty; of cancer; of natural disasters; of mental breakdown; of bipolar disorder; of drug addiction; of MS and so on. Hope meets people where they are and lifts the burden they carry, even for a time. This was the task given to the prophet in our first reading. God has tasked them to offer his alternative vision to a broken people. And it’s stirring stuff. And as we hear these words this morning our minds are transported to Jesus’ visit to the Temple where he stands to read the reading appointed for the day, which are these words, and as he finished reading and sat down, he says that this transformative vision of God has been fulfilled in Him that day. Isaiah spoke these words to a nation in devastation, but Jesus speaks them to his people under Roman rule and indeed to anyone and always to those who lives have been razed to the ground. For whom hope is just a pipe dream.

I wonder what God’s vision through Isaiah but fulfilled in Jesus might look like to 21st century Britain? To provide Christmas lunch for those who can’t afford it due to benefit cuts? Offering the hand of friendship to the lonely isolated neighbour who’s family either live a long way away or who have washed their hands of their mother? To push the trolley around Meresworth and support the residents and their families with a  cheery word. The thing is, the prophet only does all that he or she does because God’s spirit is on them and they have been anointed and commissioned for this task. As have we. 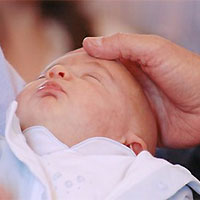 At our baptism we were gifted the Spirit of God and either then or at our Conformation we may have been anointed with oil to symbolise being set apart for the task which God gives us all. This is the task of the church afresh in each generation.

Isaiah’s words weren’t just about rebuilding the Temple.  They were about rebuilding a whole city; the prophet’s words weren’t just for the faithful remnant of Israel, as strangers and foreigners were welcomed to work and live within the community. God’s vision has much wider scope. As Israel accepted and built this vision into a reality, so the nations would look at them and see the hand of God at work. But it starts with kindness to the bereaved and broken as a sign that God is coming to rescue and to free.

And it begins with us. This wild, unbridled hope begins with us. It begins with us accepting that this is God’s agenda; it begins with us receiving this as God’s agenda in us; it begins with us living this as God’s agenda in our communities as an evangelistic task. In a society that knows less and less of the story of faith and is open less and less to the institution - people are still inspired and changed by acts of kindness and love. There’s lots of talk in the Church of England about growing our churches and some here too. This in of itself is not a bad thing save that the vision that Isaiah shares isn’t about numbers but about transformed lives. I’m not convinced that if we ran the Alpha course more regularly that the church would grow;  I’m not convinced if we shorted or changed our worship that our churches would grow; but I am completely convinced that when we each open our hearts and our hands and our homes and offer kindness and compassion of the sort of which Isaiah spoke and Jesus ministered it is here that love is found and it is in these pockets of hope where friendships are built and God is encountered.
Posted by Fr. Simon Cutmore at 10:59 am