St Peter And The Art Of Prediction

At Diocesan Synod yesterday, Bishop Alan began his presidential address speaking about a book called ‘Superforcasting: The Art and Science of prediction.’ In it, the authors look at the way that experts attempt to predict the future, such as what is going to happen to the financial markets in the coming year. It’s telling, however, that one of the authors has concluded that in a wide range of subjects “there was very little difference between the accuracy of so-called ‘experts’ and guesses made by the man in the street.”

Well that’s what we re-discovered this past week. Most of us went to bed on Thursday night believing the opinion polls’ view that there was a small margin in favour of the United Kingdom remaining in the EU. International money markets agreed and the exchange rates and share indexes reflected this consensus. Some of us stayed up to watch the results come in and as they did we discovered that we had decided to divorce our immediate European neighbours after a forty year marriage and we now want to have a different set of relationships with other countries.

But this fracturing of relationships on the global stage, only mirrors the reshaping of relationships that we see at an individual or cultural level where increasingly we as people distrust large institutions of power that tell us what to think or do - instead we constantly seek our own political ideologies and cultural identities (no longer are you a mod or a rocker but you might be a post punk or prog rocker or any other myriad of identities today and tomorrow be something totally different). Similarly traditional models of relationship such as marriage no longer enduring and are ultimately disposable because all that matters is my happiness. We are ever increasingly the ‘me’ generation or put another way - the L’Orel generation - because all that matters is my happiness - because I’m worth it. 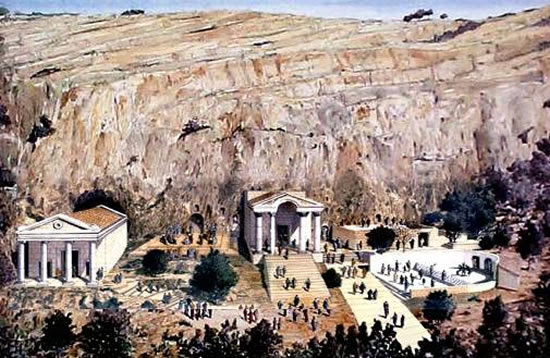 Caesarea Philippi was a Roman town south of the Golan Heights. It was previously known as Banias but it was renamed by Herod Philip II to honour Caesar - and himself too - and their ongoing relationship of power and it was the administrative centre of Herod’s rule. It was also one of the places where the goat god Pan was worshipped who was said to have been born in a nearby cave, known as the gates of Hell.

Jesus asked His disciples, ‘Who do people say that the Son of Man is? Until last September few people in her native Macedonia had heard of Katica Janeva. As chief prosecutor in a small border town, her work mainly consisted of pursuing petty thieves and people-smugglers. But now she has been thrust centre stage in this turbulent former Yugoslav republic. Her new job is to probe claims of wrongdoing and corruption raised by a huge wiretapping scandal that has engulfed the government. Her identity has changed from being a basically unknown to being a widely known fighter for truth and justice.

In Matthew’s Gospel, Jesus describes himself as the Son of Man - an identity with implications. He’s identifying himself as a ‘son of Adam’ the man in the street; he’s also contrasting the lowliness of humanity and the glory of God; but he’s also identifying with a future figure who’s coming will signal the end history and the coming of God’s judgement and justice. Do people in these early days of his ministry and in a place laced with political, kingly and spiritual power, know yet who Jesus really is - what his identity is, and what he’s come to bring about?

Jesus said: And I tell you, you are Peter, and on this rock I will build my church. Pope Francis, the successor to St Peter whom we commemorate today, his ministry continues to cause controversy. In a visit to Armenia recently, he described the killing of 1.5 million Armenian Christians as genocide. This on the one hand is an olive branch to the Armenian Apostolic church from the head of the Armenian Catholic church as the Apostolic church canonised those who died at the end of the Ottoman empire as martyrs, but it’s also on the other hand a clear call for historic justice and ultimately reconciliation.

I have often wondered why Jesus renames Simon as Peter. Petros, the stone or rock. Peter doesn't seem particularly stable or reliable a person on which to build something as lasting as the church. Peter the fisherman; Peter the one who misunderstands; Peter the one with his foot so often in his mouth; Peter the denier of Christ. And then I realised Simon only becomes Peter when he lives in the life changing reality of the coming kingdom of Jesus the Son of Man. Simon is Peter not because Jesus tells him he is, but Simon is Peter because of who Jesus is and what He continues to lead him into and reveal to him about the love of God. Simon's new identity as Peter isn't something he earns, but something in grace that Jesus confers on him again and again and again. And no other power - political, cultural, or spiritual - can take that away from him.

What is Jesus asking of us as we keep the Feast of St peter today? In these days of a shifting political landscape in terms of our relationships with our European neighbours and each other depending on which way you voted; after, what I believe to have been a poor four months of debate from both sides leading up to Thursday’s referendum based on a small minded and visionless politics, we must now move forward together for the common good.

St Peter will have heard Jesus teach on the greatest commandment - to love God with all that you are and to love your neighbour. Like St Peter’s successor, Pope Francis, how do we now listen to and show love to those with whom we have disagreed in these days, but also, how do we ensure - as followers of the same Jesus that Peter knew - that the voices of those who were not heard in the referendum or the voices of those who are constantly silenced in our communities or our world are heard? As we prepare ourselves as communities to welcome Syrian refugees from the UNHCR camps and elsewhere in the coming months: How do we not only transform the name - refugee, migrant, scrounger, vermin an so on - that they are given by the media and our communities - but transform their lives to become people again?

Spend a moment in quiet and in your mind ponder: what does it mean for me to say that Jesus is the Messiah. How would I describe Jesus to someone who never heard of him before. How would I demonstrate that I am no longer Simon, or Paul, or Maureen or Julie, but Peter through whom God’s kingdom is coming to a child…or adult…or friend…or a Syrian refugee.

Peter saw in Jesus what’s possible even in the face of political might and the very real fear for some.  Rather than give into the threat of disease, Jesus healed. Rather than surrender the powers that control people’s lives, Jesus showed compassion. Rather than let people starve because there’s not enough to go around, Jesus fed people who were hungry. Jesus refused to be satisfied or limited by the status quo and invites us to do the same, because if Jesus’ life and death show us how much God loves us, Jesus’ resurrection shows us that that love is more powerful than hate and fear and even death.
Posted by Fr. Simon Cutmore at 9:26 pm