I have to say that I found the mechanics of the way that we were being taught to preach was undoing the style I had learned over 15 years. It was like the key trainer was talking in Russian whilst I understood only English. As the first day went on I found myself becoming more and more dispirited, deskilled and frustrated.

I had to have a conversation with the trainers more than once privately asking them to explain to me again what it was they were wanting me as an experienced preacher to do.

And then somehow during the early part of day two - the penny dropped. What was being asked of us was to preach according to a pattern which will help us prepare and also deliver exactly what we wanted/needed to say.  The structure looks like this:

Attention: The sermon opens with some sort of attention grabber. Something to draw the hearers attention to the fact that you hope to share something worship with them

Empathy: Find some way of empathising with your hearers in relation to the sermon's key theme.

Insight 1: A small and short insight gleaned from the passage backed up with a short story to illustrate your point.

Insight 2: A more significant insight gleaned from the passage backed up with a short story to illustrate your point.

Insight 3: The key point you wish to make from the passage(s) backed up with a short story to illustrate your point.

Ask - What is Jesus saying to us through this passage (or passages) of Scripture?

What are you going to do now? How do we respond? Give some options that are attainable as suggestions.

I have prepared and preached this way twice now. Whilst I am very much still learning how to use this plan, I am finding that it gives a very clear structure to my preparation and hopefully also to what I ultimately deliver.

The sermon is then written on a series of post it notes which I have up til now, stuck inside my journal. 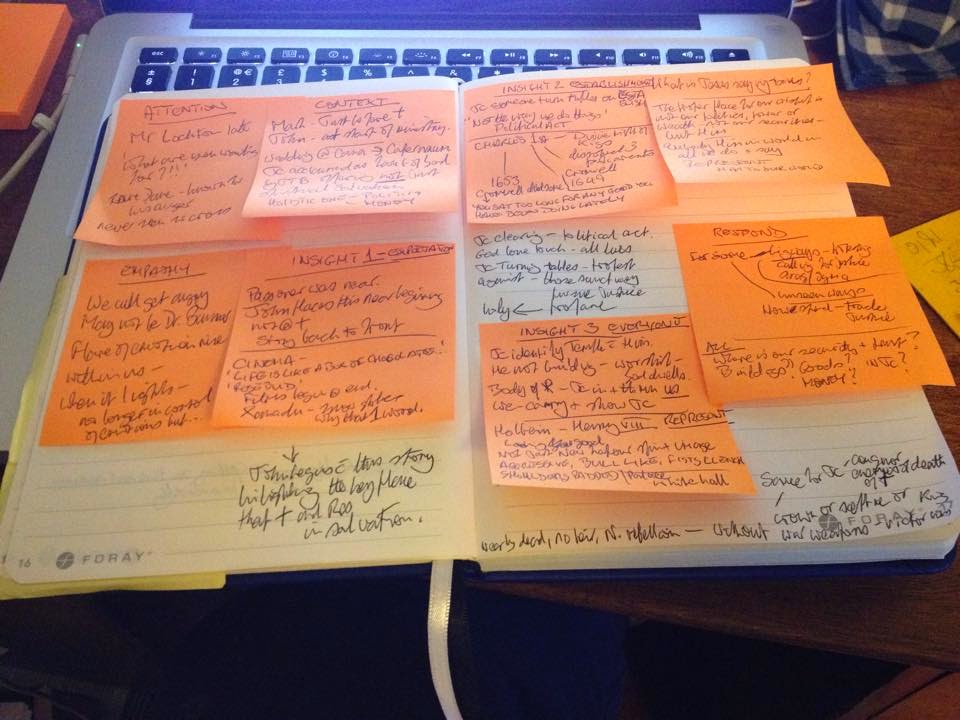 Preaching this way, rather than using a full script, was initially scary as I wasn't completely clear, word by word, what was coming next. But what has happened, as I have grown in confidence in this method, is that I am engaging more and responding more readily to my hearers - which is a good thing!

Here then is the 'text' of what I preached at 8am and 9am this morning and the accompanying audio.

This morning's sermon was too long - I am ultimately aiming for 10-12 minutes, but I will continue to hone this craft. I hope my hearers will bear with me!

Attention grabber
Story of waiting for Mr Lockton's maths class to begin. What are you waiting for? Christmas! I have never seen Mr Eliston, otherise known as Rave Dave beachse of his angry outbursts look so cross.

Empathy
We all get angry sometimes - we may not be like Dr Banner in the 1970’s classic Incredible Hulk - ‘Don’t make me angry. You won’t like me when I’m angry. But we all know what it’s like to feel the flare of anger rise within us - all too aware that when it lights, we are no longer in control of our emotions, but they are in control of us.

Context
This story in Mark is placed just before the Crucifixion. In John it’s at the start of his public ministry, Wedding at Cana and then they head to Caperneum. Jesus acclaimed as Lamb of God by John the Baptist isn’t just offering spiritual salvation but a holistic one where God impacts all of our lives - including our politics and the way we spend our money.

Insight 1
The passover was near - John places the drama of the lead up to the Crucifixion - the cleansing of the temple - right at the beginning of his account. It’s all back to front.

Illustration: I love going to the cinema. It’s amazing how some lines from films stick in your head isn’t it? ‘Life is like a box of chocolates - you never know what’s coming next’ or ‘Rosebud.’ Both films start at the end.  Orson Welles’s film begins with Citizen Kane on his deathbed in heaving fortified Xanadu clutching a snow globe and uttering that one word. The film then delves backwards to find the significance of that line.

John begins his Gospel with a story that other Gospel writers place at the end of Jesus’ life - highliting at the outset the key place that the crucifixion and Resurrection play in our salvation.

Insight 2
Jesus is someone who will turn the tables on the Establishment, who will challenge ‘the way we always do things here’. This is very much a political act.

Illustration: Charles I believed in the divine right of kings. Quarrelled with a dissolved 3 parliaments which led to civil war. Handed over eventually to Oliver Cromwell. Charles as you probably know was imprisoned and executed in 1649. In 1653 Cromwell actually did the same - dissolving the Rump Parliament with words that could be contemporary You have sat too long for any good you have been doing lately ... Depart, I say; and let us have done with you. In the name of God, go!

Jesus cleansing the Temple is a deeply political act reminding us that God’s saving love touches ever aspect of our lives. Jesus turning tables here is Jesus’ protest against those who had allowed the Temple to be a place that gave sanctuary to those who refused to pursue the justice of God. Jesus makes holy again that which was being profaned.

Insight 3 (Key point)
Jesus is shown identifying the Temple with himself. In other words, he – not the building – is the place where God dwells and the focus of faith. And now, we are the body of Christ, the church (1 Corinthians 12.27). Christ dwells in and through us. We have the responsibility of carrying and representing the image of Christ.

Illustration: We’ve all seen that portrait of Henry Viii - you know - *that one* but what I didn’t know until recently was Holbein, the artist was trying to make Henry look good.
It wasn’t just the notrious Labour Government who were spinning comment and were concealsy image conscious in getting their message across. Henry VIII and many before him did it too.

You know the painting I mean - the aggressive, defiant, bull-like figure, staring straight out at us, feet spread, fists clenched, shoulders padded, codpiece thrusting – every sumptuously adorned, jewel-encrusted inch proclaiming his self-assured magnificence. Unlike the real thing it seems.

Painted during the worst year of his reign following no male heir and an uprising the north an nearly dying himself. It was painted to hang in the Palace of Whitehall to proclaim that without recourse to crown and sceptre or the weapons of war, that here was a victorious warrior king who had triumphed over his enemies and stood defiant in the face of all opposition.

Jesus would go on to conquer his enemies and ours but not through power or might, but through selfless submission to His enemies will and rising victorious from the death of the cross, setting us all free.

What is Jesus saying to us?
The proper place for our worship is no longer Temple, but Him, and we, as His body, need to continue to embody Him in the world individually and corporately in everything we do and say.

How will we repsond - options

- For some of us it might be in grand ways - protesting and calling for justice and fresh starts for people in Iraq or Syria.
- For others it will be in unseen ways such as the way that we choose to spend our money - perhaps deliberately choosing fairly traded produce knowing that it brings a just a fair wage to the producer.
- For all of us, whilst enjoying the beauty of our buildings and them being an aid to our worship need to remember that we worship Jesus and trust Him to lead and guide us into the presence of God and we can do that in school halls and fields as well as places such as this.

Lord Jesus,
you came among us challenging our ways, our assumptions,
our politics, and the way we treat each other.
Help us to hear your voice crying in our wilderness,
to see your light shining in our darkness.
Help us to become the people you made us to be,
your body in the world,
carrying both your wounds and your love.
Bring us to the places where you need us to be,
serving all your children. Amen.

Thanks for sharing this. It is actually very similar to how I was taught to preach by (the now) Bishop of Jarrow, but I still then went on to write things out word for word.However, as an incumbent preaching roughly twice weekly, this is not sustainable anymore. I am definitely going to give the post-it notes in a journal a try!

Bless you Kate! I was never taught so I think that's why I found the initial day so taxing. I am about to purchase a 2nd hand iPad and I will try preaching using 'stickies' on that and see how it feels.