Anthony Walker and the Love of God

Back in 2005, a vivacious young man was waiting at a bus stop with his girl friend. Some lads appeared over the other side of the road shouting racist taunts. The young couple decided to avoid confrontation by walking down to another stop. The lads followed. The chase ultimately led into a park where the young man was confronted and beaten to death with an ice axe. The young man was Anthony Walker.

As she left the court flanked by her daughters following the trial of her son’s killers, Gee Walker said, ‘Do I forgive them? At the point of death Jesus said, ‘I forgive them because they do not know what they do’. I have got to forgive them. I still forgive them. It will be difficult but we have no choice but to live on for Anthony. Each of us will take a piece of him and will carry on his life.” 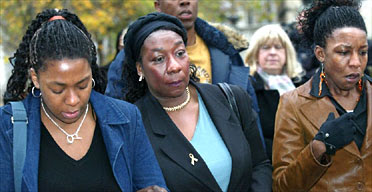 “…For God so loved the world," John writes, "that he gave his only son, that whoever believes in him should not perish but have eternal life." In other words, God loved the world so much that he gave his only son even to this obscene horror; He so loved the world that in some ultimately indescribable way and at some ultimately immeasurable cost,  he gave the world himself. Out of this terrible death, John says, comes eternal life, not just in the sense of resurrection to life after death, but in the sense of life so precious even this side of death that to live it is to stand with one foot already in eternity. To participate in the life and death of Jesus Christ, to recognise the victory of Christ crucified, is to live already in his kingdom. This is the heart of the Good News, especially on this Holy Cross Day, and it is why the cross has become the chief Christian symbol.

A cross of all things - a guillotine, a gallows - but the cross at the same time is also the crossroads between eternity and time, as the place where such a Divine heart was broken that the love and forgiveness of God himself could flow through it into a sick and broken world.

Yet this supposed failure of Christ crucified will cause a crisis (krisis, is the Greek word for judgment) for all who encounter Him. Because the Cross is unjust, because it is so stark, because it is so shocking, it continues to be the thing that turns people away, but without it Jesus remains just a Teacher and Healer.  It is only in the cross that God restakes a claim on His world and all that is.  In the presence of Christ Crucified, those who do evil will flee His light to hide their deeds, yet others who believe and confess their need will come into the light to live a life of grace.

These verses stand at the close of the story of Nicodemus, and here we notice something odd: Nicodemus has disappeared. It’s similar to the close of a movie scene where the screen fades to black as we listen to the narrator continue to speak. So also here, as Nicodemus the Pharisee and leader fades away, presumably back to where he came from, decided or undecided about Jesus we do not yet know, and all we are left with is Jesus’ words, reminding us of the offer of abundant life and grace from God which demands our attention and ultimately a decision.

This scene and pattern is replayed countless times in our lives and never more explicitly than on Sunday morning. For here, too, we are offered the the abundant life and grace of God in Word and Sacrament. But like Nicodemus we are faced with a decision.

How will we respond, for respond we must? We either seek our source of goodness, grace, security and life from Him or from elsewhere. And as we leave the altar rail and return to our daily lives, we will be offered countless other options -- status, power, possessions, and more -- that similarly promise us life and require our allegiance in return.
“…For God so loved the world…”

This is the first and last word of this Gospel, indeed of the whole Christian story. So perhaps especially on this Holy Cross day it’s not so much  -- would you like to receive God’s love and life? -- as about God’s shout of victory and decision across eternity -- God loves you and all the world!

The cross is ultimately a paradox - 'para' meaning near to and 'doxa' meaning glory because somehow through the Christ’s death we are innaugurated into the new life of God. The cross stands between our fallenness and our fulfillment, between the dust from which we come and the glory towards which we move, between that which is good and that which painful and broken in us. And yet we know too well that these are not different places: for sin and grace, hate and love, dust and glory, make up each one.

The cross of Christ meets us at these points of conflict - in our own brokenness and darkness and our longing for wholeness. It is the points where the foundations of our very being are shaken, that Christ’s cross becomes for us forgiveness for hurt, hope in despair and healing for brokenness and life out of death - God’s shout of victory and love for all that is. For at the cross, we are indeed close to glory. Amen.
Posted by Fr. Simon Cutmore at 9:55 pm