Christianity in the Digital Space 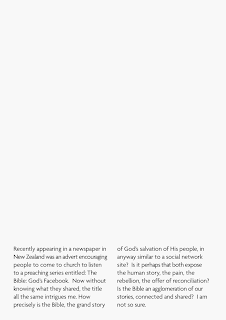 Thought provoking stuff! At the heart of what he said, Mark challenged the church to not just be the institution but to continue to be like God, the incarnation of the Word; to present herself and the scriptures in fresh ways on the web. The address is below or available to download here.

This is challenging especially as Bible literacy is in serious decline in the UK according to a recent study - the National Bible Literacy Survey. BBC article here.

The study showed many still turn to the Bible at times of emotional stress.

The researchers said their findings showed the Church and politicians could no longer make assumptions about people's knowledge of the Bible, which in under 45s is in decline.

The study revealed that 62% of respondents did not know the parable of the Prodigal Son and 60% could not name anything about the story of the Good Samaritan.

One respondent said David and Goliath was the name of a ship, while another thought Daniel - who survived being thrown into the lions' den - was the Lion King.

Younger interviewees told researchers that the Bible was "old-fashioned", "irrelevant" and "for Dot Cottons"

Why not sign up to to The Bible facebook page and interact with the scriptures together with others?
Posted by Fr. Simon Cutmore at 10:35 am